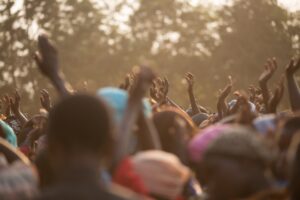 On Friday, April 16th, PTR’s African Communities Program, in partnership with the University of San Francisco and African Advocacy Network, facilitated a conference on Immigration and Social Justice with influential students, educators, and leaders in the African community. The conference was an all-day event, and the topics discussed ranged from support and visibility for Black immigrants, to the discrimination African migrants experience, joining the workforce, poverty, colorism, white supremacy, and more.

At 2pm, there was a panel of students that included: Hamida Dahir, Daisy Byers, Shennel Henries,  Zefitret Molla, and Mutui Fakorede. The students were asked questions prepared by PTR African Communities Wellbeing Coordinator Jean Pierre Ndagijimana, and those in attendance. When asked their thoughts on different issues facing the African community, one student expressed the sentiment that, “We, [black people]  are one people. We need to think out of the box. [Let’s] keep in mind how you relate to people.” Another speaker later went on to say, “What can change is how we organize ourselves, how we build collective voice. We are connected to community organizations, but they are not always set up to advocate for us in the American political system.”

As the conference went on, Mutui Fakorede asserted and explained that when an individual moves to a new country, they face a “hexagon” challenge. Factors include poverty, education, housing, employment, acculturation, and social functionality. To this his fellow panelist, Hamida Dahir, added, “Mental health is another element to the hexagon.” Fakorede agreed and concluded that when it comes to addressing and attempting to solve the hexagon challenge, “Whatever we do, it needs to speak to the totality of the human being.” Fakorede referenced that some solutions are one-dimensional and only address one aspect of the challenges migrants face (i.e housing or employment), but fail to tackle other aspects of the issues they are facing such as mental health.

The panel later transitioned from students to leaders and educators, who spoke more on these issues and other issues impacting the community, as well as potential ways to improve upon them. The meeting was very educational and gave way to a fruitful discussion about the experiences of African migrants in comparison to other migrant groups, solidarity in the black community, mental health awareness, and the effects of rampant white supremacy in our society. As it came to a close, those who had organized the event alluded to potentially having more events of the same nature in the near future, due to the importance of the topics discussed.