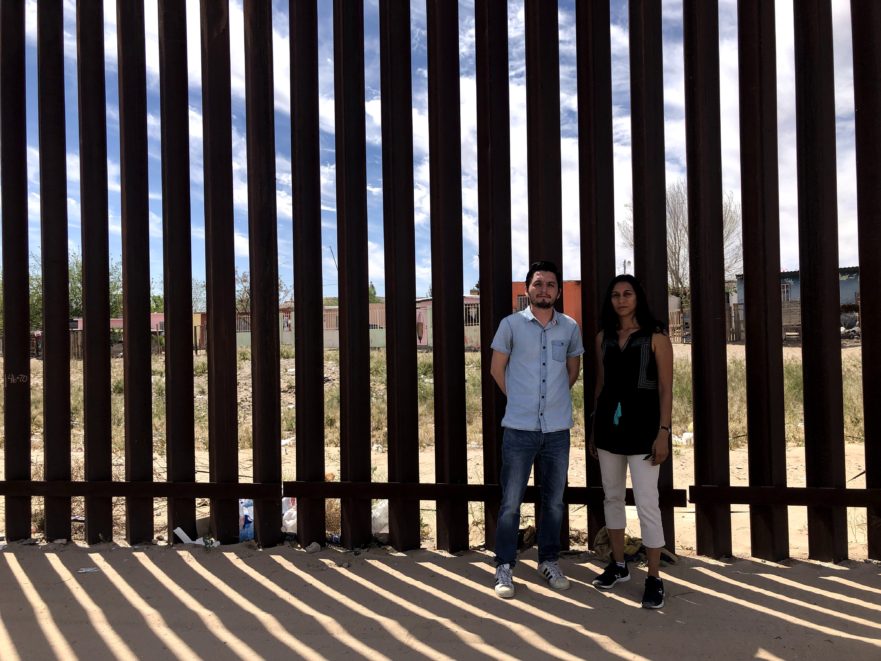 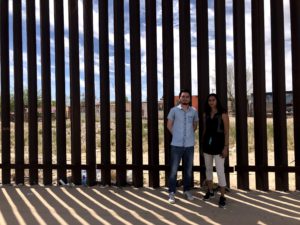 PTR Co-Founder and Board Chair Monika Parikh at the Anapra Border Wall with Diego Adame of Hope Border Institute.

We woke up early that morning at the overflow migrant shelter and joined approximately 20 young men who were looking out the window above the cots where they had slept the night before.  In the distance were the pink, orange and gold hues of the early morning desert mountains that extend from El Paso to New Mexico.  The view was breathtaking, and new, for the men who had traveled 2,000 miles to arrive in this new land.  They, along with at least 70 other Central American men, women and children who had typically passed their credible fear interviews arrived at the shelter the night before.  Because they were able to show they have a credible fear of being persecuted in their home country, they cannot be deported until their asylum case is adjudicated.  They will soon embark on the next leg of their journey, hopefully to a safe home with family who will host them while they seek asylum status.  Having spent the night at the shelter as volunteers, my daughter and I now joined them in taking in the beauty of this land – land  which can be harsh with its extreme heat and cold – and, as we did, I recalled the numerous possible hurdles they’ve already overcome.

Whether it was the pre-migration violence and threats that they fled, witnessing the murder of family or friends, the risks of exploitation and dehydration on the journey, or the treatment once they’ve arrived at the U.S./Mexico border, it was apparent in their eyes.  The day prior, when we sat near a 7-year old child, his eyes – like almost every immigrant I met at the shelter – were red with exhaustion.  He sat slumped in his chair, with a sweet cake given to him by local church volunteers who feed the immigrants daily, with generosity of food, time and warmth.  As he held the cake, and I imagined my own children eagerly eating it with abandon, he on the other hand, could hardly hold the cake, spilling it on his lap.  When I asked his father if he was ok, he simply said, “He’s tired.”

As I looked at my daughter – fifteen years old and strong – I had difficulty imagining where the strength for such a journey can be found within the bodies of the many small children and babies that slept at that shelter.

I wondered what the future held for them.  Eighty percent will be denied asylum, not because they don’t have a valid case or credible fear of returning to their home country, but because factors such as language barriers, memory fragmentation caused by trauma, lack of legal representation, children as young as 3 years old representing themselves and extreme variance in courts’ asylum grant rates, pose hurdles that can be impossible to overcome.  While some policymakers advocate for the building of a physical wall, there are already numerous and growing administrative barriers that prevent asylum seekers from securing the safety they need to survive and thrive.  And the cruelty with which many are received at the border – such as the force feeding of detained hunger strikers in the El Paso Processing Center – is re-traumatizing the very people who are seeking safety.

But there is hope.  Organizations like Hope Border Institute are highlighting these barriers and more, through their research on how the current administration’s policies are actually implemented in the borderland.  On the other side of El Paso, Texas is Ciudad Juarez, Mexico.  The two are sister cities with individuals and families crossing daily, not to move or migrate permanently, but because the economies and lives of people across this man-made border are so intertwined.  These connections question what we sometimes take as given about who belongs where and who has the right to be one’s neighbor.  We can build walls and speak of the “other” as if they have nothing to do with us, but in reality, we are all connected through our families, our economies, our politics and our histories.

The first day that we began working at the shelter, my daughter and I met a fellow volunteer who had arrived the day before.  As we each shared with each other the stories of where we live and what brought us to volunteer that week, we soon learned that we sat on different sides of the political spectrum.  Initially, there was a bit of tension, as she expressed to me, “I support the wall.”  I was quiet for a bit, absorbing this information and observing her, and after a few moments, she expressed, “I’m here because it’s not their [the immigrants’] fault that they have to be here, living in these conditions.”  While I disagree with her political positions, to me, this spoke to what we at PTR hope is the cure for the historical wounds that divide us.  This woman, just like my daughter and I, was called to volunteer in the borderland because of something we have in common: our shared humanity.

Perhaps if we can keep attuning to what motivates us as human beings to care for, and connect with, others, we – like the volunteers and advocates at the border – can break down the walls that divide us.  And, together, we can start creating a just and sustainable immigration system that recognizes that, no matter which walls are built, our shared humanity will bring us together.

For World Refugee Month during the month of June, we invite you to join us in honoring these advocates by joining Partnerships for Trauma Recovery’s Borderland Solidarity Fundraiser.  Every dollar you give to support PTR’s work with asylum seekers will be matched 100% up to $10,000 with a contribution to Hope Border Institute, whose on-the-ground research and advocacy in the borderland is strengthening justice for those who seek refuge from violence and persecution.